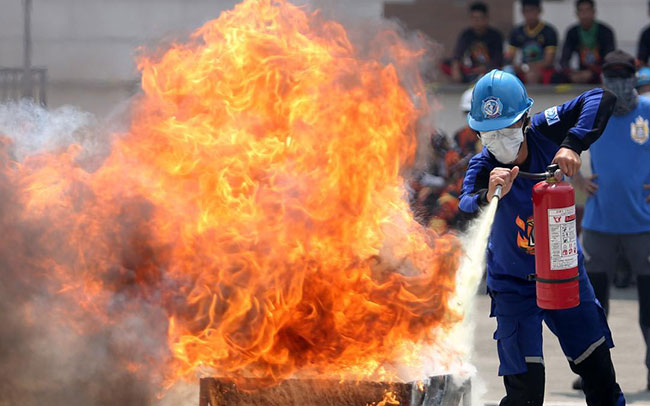 THE CITY OF BACOLOD: Two of the three suspects, who allegedly started a fire at the Java nursing home along Gonzaga Street in Bacolod town last Tuesday, were arrested in joint operations by the town’s Police Station 1 (PS1) and the Murcia municipal police station.

Police identified the two suspects as Rodolfo Inson Jr., from Bacolod City and Venancio Valeriano, a resident of Barangay Amayco, in the city of Murcia.

The third suspect, meanwhile, has yet to be identified by police, although an operation has been launched by police at the time of publication.

Major Jovil Sedel, commander of PS1, said he managed to identify the suspects after interviewing several witnesses, who then positively identified Valeriano through the thug galleries at the station.

The police commander added that Valeriano had a history of theft and gambling in both the PS1 police and the Murcia police, while Inson also had a previous case of theft at the police station. 6.

Sedel said Inson’s theft cases occurred while he was still the PS6 commander.

He immediately coordinated with Murcia’s municipal police station to locate Valeriano, as the suspect allegedly jumped from place to place.

The initial operation to capture Valeriano was also difficult as the barangay (village) where he lives was in the mountainous part of town.

Valeriano was finally arrested on Saturday, alongside Inson who was arrested in Bacolod City.

The suspects were then brought to PS1, where they were interviewed by police and arson investigators from the Bureau of Fire Protection.

Sedel said the suspects said they were trying to steal a motorcycle helmet by using a lighter and burning the strap in order to remove it.

The suspects then brought the helmet to the Burgos public market area where they sold it for P150.

They said they were unaware that their action caused the motorcycle to set on fire and only found out when they heard an explosion.

“The suspects then had breakfast and even returned to the crime scene later,” Sedel said.

He added that they would file arson charges today with charges of multiple homicides and multiple physical injuries against the suspects.

At dawn on Tuesday, the Java Pension House was devastated by a fire, killing property owner Christopher Java, her 12-year-old son Miguel and mother Magdalena, 70, and housekeeper Ronalyn Dacallo, 44. Years.

Arnold Felomino, the receptionist of the retirement home, was also killed in the fire; and Arniel Bajenting, a hardware salesman.

The fire is the worst in Bacolod this year, with damage estimated at 8 million pula.